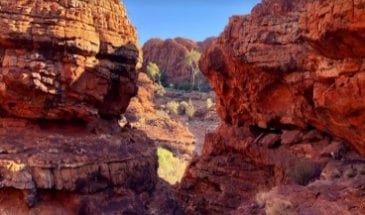 Kings Canyon is an area within the Watarrka National Park and the canyon 270m high. Kings Canyon had been known to white settlers since the 19th century, but it was not until John Muir first visited in 1873 that the canyon came to prominins.

Watarrka National Park is an important conservation area. In rock holes and gorges there are over 600 species of plants, as well many native animals. The sheer red rock face of Kings Canyon soars over 100 metres above dense forests of palms, ferns and cycads; providing the shelter from surrounding desert conditions.

The walk around the rim of the canyon is definitely worth it as the views are spectacular, although it can take 3-4 hours and should only be attempted early in the morning during the summer months. On your way around the rim of the canyon you will pass the tropical pools of the Garden of Eden, and the beehive rock formations called the Lost City. The views from the canyon are also spectacular, overlooking the beautiful landscape.

Learn the cultural and spiritual significance of the park for its Traditional Owners,

There are no reviews yet.